“Let us get to know each other through BOOKS” eTwinning Project

On European Day of Languages, September 26th 2016, a brand new project about books was launched between a teacher from Bulgaria – Slavka Stoycheva, and Alena Ščuková from Czech Republic, to which we gladly adhered on the day.

The launching event was held with a Skype conference with the two teams from Bulgaria- from Asenovgrad and Blagoevgrad – and the students form “Gheorghe Asachi” High School. Since then, lots of activities dedicated to books, previously planned in the Twinspace agenda, have been done.

On December 2, 2016, we all took part in a worldwide event dedicated to the 400th anniversary of Shakespeare’s death in 1616. We read his poems, analyzed his most famous quotes, watched actors speaking about his influence on language, theatre and humanity in general. UK’s British Council provided wonderful resources for the day, so we enjoyed and shared the event on Twitter and Facebook, and found out that many young people celebrated it on the same day with us.

In January 2017, we created the eTwinning Library in our classroom, inviting students who love reading to donate books they liked most, and take home books from the club’s library to read and bring back.

In February, we skyped with Mr. Rob Ford, principal of Wyedean School from UK, and discussed books to be read by leaders, be it country/school/community leaders,etc. Mr.Ford recommended a list of good books that leaders can get inspired from. We took as reference Barack Obama’s list of books recommended to young people.

Also in February we skyped with the principal from Wyedean HS in UK, talking about English authors that are famous for speaking about love, some of them hiding the historical reality of the times they lived in (e.g. Jane Austen’s “Pride and Prejudice”). Well, good to know.

In general, the collaboration between the two schools has already several years of history, this being mentioned in a UK Parliament Report on Secondary Education in September 2016.

In March we interviewed librarians. Each team provided a video, for the production of which students spent time and had fun in the process. The students from “Gheorghe Asachi” HS interviewed both the school librarian, Veronica Ciobanu, and also the chief of the relations department and the National Library, Raisa Melnic.

Last week, the eTwinning Book Lovers’ Club had a guest – the author of “The Golden Book of Bessarabia and Republic of Moldova”, Mr.Denis Rosca, who told lots of interesting things about people who made a difference in the world, and whose origins are from our country: Nobel Prize and Oscar winners, military and political leaders,etc. The students were very impressed! 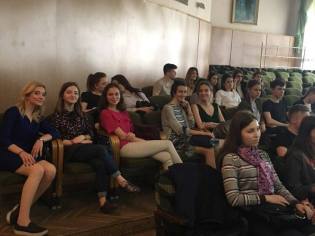 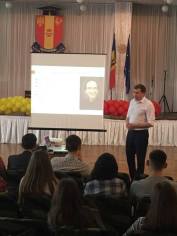 Yesterday, May 10th, we had another special guest – Mr. Octavian Țîcu – historian, boxing champion who represented Moldova at the summer Olympic Games in 1996, writer and ex-Minister of Youth and Sport. He presented two of his books “Variations of a Name” – about the famous footballer Nicolae Simatoc, who was born in Moldova, and got to play in Ripensia Timisoara,CAO Oradea, Inter Milano and FC Barcelona , and his second book – “Spassk-99”, a book about those people who were deported in Kazakhstan during the Soviet times. We were delighted to discover a huge list of all the names of Romanian people (from Bessarabia and Romania) who got there. This book was a result of hard work and a lot of investigation and research. Besides the two books, we discussed Moldova’s situation nowadays, the meaning of 9th of May to citizens of our country, the oscillation of Moldovan leaders, as well as many simple citizens, between East and West; Mr.Țîcu explained the Holocaust as a phenomenon and how Jews were treated in our country in the previous century. An amazing history lesson about the 20th century and our days,too.

Lots of wonderful things happened in this eTwinning project during the school year. Lots of books and their films discussed, lots of impressions, and, most important – a myriad of books read!

I personally express my thanks to all the partners and guests of our eTwinning odyssey through the world of books. So humble,yet so important…

Nothing can light up the darkness better than seeing young people interested in reading. As long as we have them read various authors, there is hope in this World!

“Education is the most powerful weapon one can use to change the World.” (Nelson Mandela)

Economic Inequality Out of Control

Getting back to Global for the 2020s International Conference